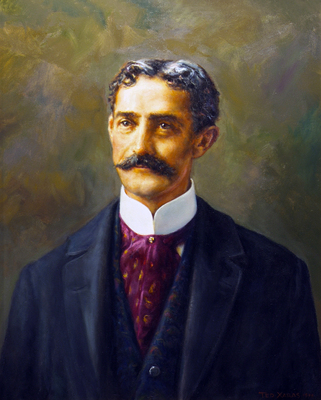 Mason W. Pressly, DO, was a Presbyterian minister from Coddle Creek, North Carolina. He held pastorates in several states before visiting A.T. Still at the American School of Ostopathy (ASO) in Kirksville to investigate osteopathy as a means to help his invalid wife. Because Pressly was such a well-known orator, his visit to Kirksville, which included several speaking engagements, brought nationwide publicity to osteopathy. His visit also inspired him to enroll at ASO in January 1897. While at Kirksville, where Pressly developed a close relationship with Still, he served as associate editor of the school's Journal of Osteopathy, as professor of physiology and as pastor of the Cumberland Presbyterian Church. With Still, he authored the definition of "osteopathy" for the Century Dictionary and, independently, continued speaking at public forums to spread the word of osteopathy. In January 1898 Pressly was elected to chair physiology and hygiene at the Northern Institute of Osteopathy in Minneapolis where, at the age of 39, he received his DO degree at the end of the year. While at the Northern Institute, Pressly became acquainted with fellow student and teacher, O.J. Snyder. The two agreed to form a partnership and Pressly came to Philadelphia in January 1899 to secure office space for the practice and school they planned to start. With his journalism experience behind him from ASO, Pressly became the founder and sole editor of the Philadelphia Journal of Osteopathy, which he created to promote osteopathy in Philadelphia. When PCIO admitted its first students, Pressly was the only teacher. He remained on the faculty until 1904, residing in Haverford with his family. Pressly's efforts to further the osteopathic profession included his involvement with the American Osteopathic Association (AOA). He wrote the AOA's first constitution and was one of the associate editors of the Journal of the AOA.