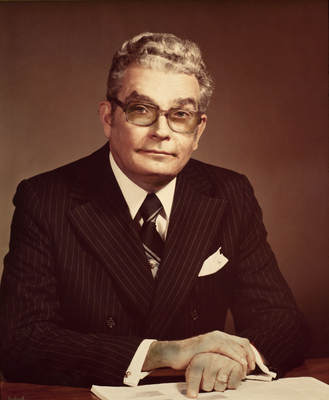 Thomas M. Rowland, Jr., DO (hon.), LLD (hon.), devoted 34 years of his life to PCOM, distinguishing himself as a leader, an educator and a friend to students, alumni, falculty and employees. Rowland was a World War II veteran (an experience he shared with many students and alumni) and a graduate of Temple University with postgraduate studies in public administration. He began his career at PCO in 1950 as assistant registrar and soon advanced to registrar and director of admissions, introducing more than 2,000 students to the osteopathic profession. The Class of 1954 awarded Rowland an honorary DO degree. Between 1959 and 1973, he rose through the ranks from President Barth's administrative assistant to executive vice president. From 1973 until his death in 1984, Rowland served as PCOM's fourth president. President Rowland led the development of PCOM into the Osteopathic Medical Center of Philadelphia. He coordinated operation of Barth Pavilion, started the School of Allied Health, nurtured the growth of the health care centers and added a new building to the campus. Rowland was an advocate for osteopathic principles and research programs. But his greatest achievement as president was in expanding and enriching the faculty through the implementation of a whole-time faculty plan and the recruitment of PhDs. Rowland was an educator as well as an administrator, a talent for which he received the 1963 Christian R. and Mary F. Lindback Foundation Award for Distinguished Teaching. His areas of expertise were in public relations, professional economics and community health. Rowland enthusiastically supported student and alumni activities and athletics. He instituted the position of class chairman, the Employee Recognition Dinner, the Annual Giving Campaign and the Founders Day Alumni Dinner Dance. During his earlier years at the College, he coached the basketball team to victory; as president, he backed the formation of soccer and rugby clubs. Rowland's impact extended beyond the PCOM community. Devoted to advancing the osteopathic profession as well as osteopathic education, he served on several committees of the AOA and on the board of governors of the American Association of Colleges of Osteopathic Medicine, of which he was also a president. Civic groups and osteopathic organizations honored Rowland for his many contributions and achievements.