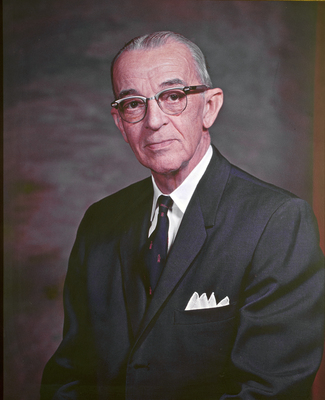 Born and raised in Dorchester, Massachusetts, Angus Cathie, DO is synonymous with anatomy at PCOM and in the osteopathic profession. He graduated from the College in 1931, then joined the faculty as an instructor after a year-long internship. By 1944 he had become professor and chair of Anatomy, and eventually chaired the combined Departments of Anatomy and Osteopathic Principles and Practice. A dedicated proponent of osteopathic medicine, Cathie was one of its most highly-respected and often-honored physicians. PCOM awarded him the 1966 O.J. Snyder Memorial Medal; the American Osteopathic Association gave him the rarely-conferred Award for Outstanding Service in Osteopathic Medicine; and the New York Academy of Osteopathy sponsored an Angus Cathie Day program in 1969, the same year that the American College of Osteopathic Surgeons named this non-surgeon an honorary member in recognition of his contributions to their field. Sometimes feared by students for his sternness, Cathie was also respected and revered. Graduates have recalled with amazement and admiration his illiustrations from classes and laboratories. Using colored chalks, Cathie drew with both hands simultaneously as he lectured on anatomy. His comprehensive knowledge of the subject, his demanding, if stern, teaching and his tireless devotion to osteopathic medicine led his students and peers to declare him the country's best anatomist of the era. Among Cathie's legacies that have transcended time is the College's museum of pathological and anatomical specimens that bears his name.