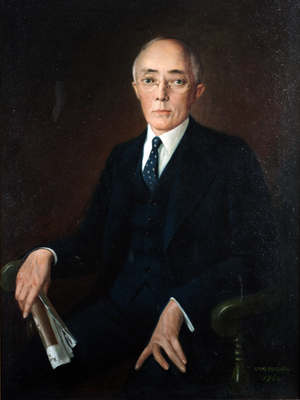 Arthur M. Flack, DO, a native of Butler, Pennsylvania, became interested in osteopathy after witnessing the successful outcomes of patients treated osteopathically during the 1903 typhoid fever epidemic in his hometown. He graduated from PCIO in 1906 and immediately began a long career as a leader at the College. From 1906 until 1923, Flack served on the board of directors and was one of the incorporators of the Osteopathic Hospital of Philadelphia in 1911. As dean of the College from 1911 to 1924, he inaugurated advanced standards of undergraduate and graduate osteopathic medical education, including the four-year curriculum that started in 1910 and the internship program begun in 1923. Flack spearheaded the campaigns that moved PCIO from its rented facilities on North Broad Street and Pine Street to its first significant property and building ownership at 19th and Spring Garden Streets, and then to 48th and Spruce Streets. A man of diverse athletic interests, Flack encouraged the formation of sports programs that became such a prevalent part of student life in the 1910s and 20's. He and his wife raised six children: four sons -- Drs. B.T. Bailey (1931), Arthur M., Jr. (1933), John (1940) and Charles (1944) --graduated from the College, as did the dean's granddaughter, Norma Jeanne Flack, DO (1983).