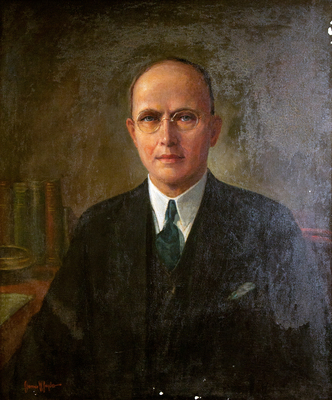 Edgar O. Holden, DO, holds the record for the longest period of service as dean, a position he held for 19 years (1924-1943). Holden began his association with the College as a teacher of chemistry, physics, biology and embryology shortly after receiving his bachelor's degree from the University of Pennsylvania in 1916. He served in the American Expeditionary Forces during World War I, then returned to PCIO where he enrolled and graduated with the Class of 1922. After two more years of teaching the same basic science courses he had taught before the war, Holden succeeded Arthur M. Flack, DO, as dean. At 30 years old, Holden became the youngest person ever to hold the position at the College. He is credited with starting the Pre-Osteopathic School in 1931 and the Graduate School of Osteopathic Medicine in 1933. Holden's tenure as dean extended through a critical chapter in the College's history. Under his leadership, PCO undertook yet another major public fund-raising campaign to finance the 48th and Spruce Streets building, and weathered the Depression that hit during construction and nearly destroyed the dreams for a new campus. Holden also guided PCO as it adapted it curriculum and hospital practice to meet wartime demands in the early 1940s, shortly before retiring in 1943 from ill health. Holden made significant contributions to the profession as well. He fathered the development of the American Osteopathic Hospital Association and, from 1934 to 1937, served as an AOA trustee.