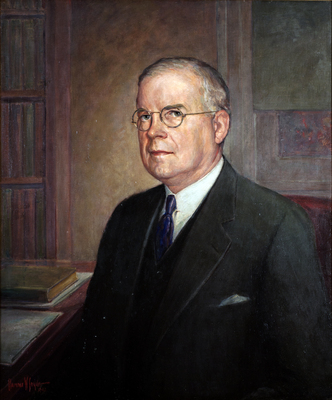 David S. B. Pennock, DO, MD, graduated from the American School of Osteopathy in Kirksville in 1901, immediately after which he joined the PCIO faculty. While teaching at PCIO, he received his MD degree from Hahnemann Medical College in 1904. Pennock brought the surgical knowledge he had gained at Hahnemann and through subsequent post-graduate courses to PCIO, where he became the College's "Father of Surger" and "Uncle Dave" to many students. Because Pennock was a licensed MD, he could practice surgery and prescribe drugs legally at PCIO prior to passage of the state's Surgeons Bill in 1923, which recognized the osteopaths' right to perform surgery. Pennock organized the College's Department of Surgery and served as chief of staff and chief surgeon of the Osteopathic Hospital of Philadelphia from its inception in 1916 until his retirement in 1947. He served on the first Surgical Board in the Commonwealth of Pennsylvania and was PCOM's first recipient of the O.J. Snyder Memorial Medal, the highest honor awarded by the College.