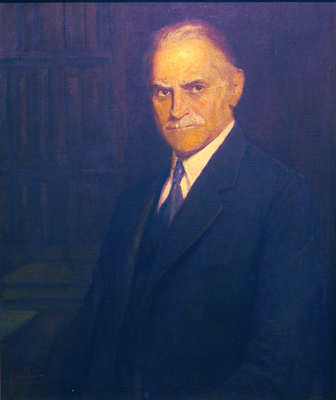 Born in St. Louis, Missouri, and raised in Wisconsin, O.J. Snyder, DO, began his career as a teacher, then entered federal government service as a special examiner in the US Pension Bureau. But when his sister's sight was restored after osteopathic manipulative treatment, Snyder pursued his studies in osteopathic medicine. He enrolled at the Nothern Institute of Osteopathy in Minneapolis where he also taught clinical microscopy. Snyder graduated from the Northern Institute in 1899, by which time he and Mason W. Pressly, DO, had formed their plans to found an osteopathic institution in Philadelphia. Snyder joined Pressly in Philadelphia in May 1899, starting 48 years of continuous involvement with the College. He served as president from 1899 to 1904, and as a trustee until his death in Narberth in 1947. If Pressly was the promoter of the College in Philadelphia, Snyder was the backer who paid the initial bills with money he earned as a teacher in Minneapolis. Once Snyder and Pressly established a private practice in Philadelphia, they both contributed earnings to the College as needed. Snyder was not only a pivotal figure in the history of PCOM, but also within the context of the profession. In 1905 Snyder led Pennsylvania's osteopathic physicians in their bid to the state legislature for a bill to legalize osteopathy in Pennsylvania, an effort which finally met success in 1909. He then served as the first chariman of the new Pennsylvania State Board of Osteopathic Examiners from 1909 to 1930.