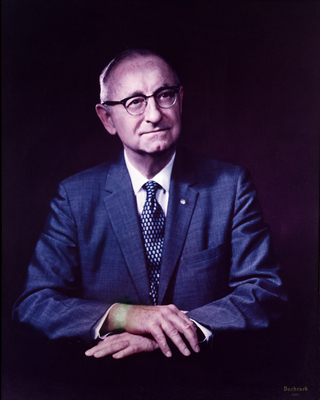 Frederic H. Barth DSc (hon.), LLD (hon.), a man who led PCO from 48th Street to City Avenue, began his service to the institution in 1949 as a member of the Hospital board of directors and the College board of trustees. By the year's end, he became president of both boards. Barth was a driving force behind the amalgamation of the two entities into a single Pennsylvania corporation. When the merger was completed in 1953, he served as president of the combined board, which also elected him president of the College. Through Barth's leadership, PCO purchased the Moss estate on City Avenue for a new college and hospital complex, and for the first time in its history, PCO received financial assistance from the state legislature to make that construction possible. He inaugurated health care outreach programs in the Philadelphia area as well as in rural Sullivan County, Pennsylvania, and led the development of Overmont, a PCOM sponsored apartment building for senior citizens on a parcel of land at the corner of Monument and Stout Roads. Barth served as the College's chief executive officer until 1974 when he was appointed chancellor. Barth was a long-time resident of Philadelphia who graduated from the Philadelphia College of Textiles and Science. He operated rubber, hardware and business supply companies and held several patents for textile equipment. For many years he served on the Philadelphia Board of Public Education. In 1959 President Eisenhower appointed Barth acting postmaster of Philadelphia, and in 1971 President Nixon placed him on the US delegation to the United Nations Commission on Human Rights. Barth received an honorary doctor of science degree from PCO in 1951 -- as well as the O.J. Snyder Memorial Medal in 1970 -- and the doctor of laws degree from the Des Moines College of Osteopathic Medicine and Surgery in 1956. In 1976 he died in the osteopathic hospital named in his honor, Frederic H. Barth Pavilion.