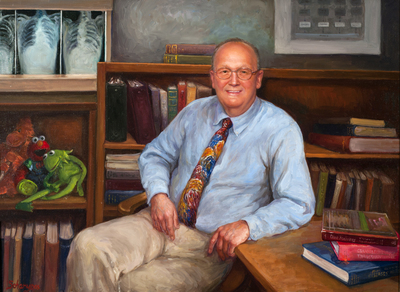 What students said about radiologist Robert L. Meals, DO, in the 1965 Synapsis has echoed for more than three decades. Meals not only has established a reputation as a distinguished teacher among PCOM students, but also among medical students throughout the country who come to PCOM to learn their radiology from this Class of 1956 alumnus. As a junior high school teacher before embarking upon a medical career, Meals developed a philosophy to make learning fun. His unconventional approach, which included sing-alongs, proved to be as effective for medical students as it was for adolescents. As a medical student, Meals trained under the osteopathic profession's "Father of Radiology," Paul T. Lloyd. Under Lloyd's tutelage, Meals acquired the principles and skills that also made him a renowned clinical radiologist and radiation therapist. After completing an internship at the 48th Street Hospital, Meals stayed on for a three-year residency in radiology and a two-year radiation therapy fellowship. In his first year on the PCO faculty as a lecturer in 1962, Meals earned the Christian R. and Mary F. Lindback Foundation Award for Distinguished Teaching. He rapidly advanced through the ranks to professor of radiology in 1970, then chairman of Radiology, Nuclear Medicine and Radiation Therapy, a post he held from 1973 to 1991. As chairman, Meals was responsible for making Barth Pavilion a cutting-edge diagnostic and treatment center by securing state-of-the-art radiology equipment including ultrasound, a four-million electron linear accelerator and a CT scanner. Throughout his long career at PCOM, Meals was active in numerous College and hospital committees, while holding various positions in the Pennsylvania Osteopathic Medical Association (including president) and the American Osteopathic Board of Radiology. In 1993 PCOM honored the "Teaching Teacher" with the O.J. Snyder Memorial Medal.