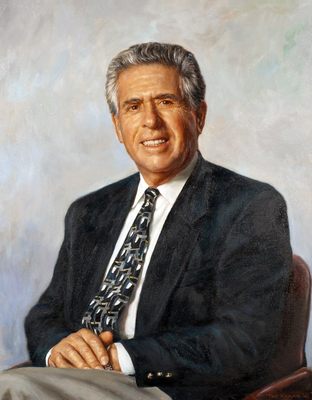 Leonard H. Finkelstein, DO, has played an important role in shaping PCOM as an educator, a clinician and since 1990, as the College's sixth president. He received his DO degree in 1959 and after an internship and general surgery residency at Zieger Osteopathic Hospital in Detroit, returned to his alma mater in 1961 for a residency in urologic surgery. Finkelstein officially joined the College faculty in 1970 as chairman of the Division of Urology. Before stepping down from this post in 1993 to focus on his responsibilities as PCOM's president, he developed an outstanding urology residency program. Finkelstein is a preeminent urologic surgeon, trained in a PCOM tradition begun by H. Willard Sterrett, DO (1917), in the 1940s, yet focused on cutting-edge ideas and technologies such as laser surgery, which he introduced to PCOM's Division of Urology in the early 1980s. As a pioneering researcher in urology in the osteopathic profession, he has lectured and published extensively. In October 1984 Finkelstein became the first DO urologist to publish in the Surgical Clinica of North America, and the first DO not affiliated with an allopathic institution to publish in The American Journal of Surgery. As president, Finkelstein has steered PCOM through times that threatened the very survival of the institution. He was responsible for the ultimate sale of Barth Pavilion in 1993 that saved the College from bankruptcy, the rejuvenation and expansion of the student body and campus after hard times, and the rebuilding of the College's financial foundation through a $25 million capital campaign. Within the larger osteopathic community, Finkelstein has received numerous awards, including the George W. Northup, DO, Distinguished Service Award from the Student Osteopathic Medical Assocation and the Distinguished Osteopathic Surgeon Award from the American College of Osteopathic Surgeons. From the institution to which he has devoted more than half his life, Finkelstein has been honored with the Christian R. and Mary F. Lindback Award for Distinguished Teaching and the Mentor Award from PCOM's Student National Medical Association.