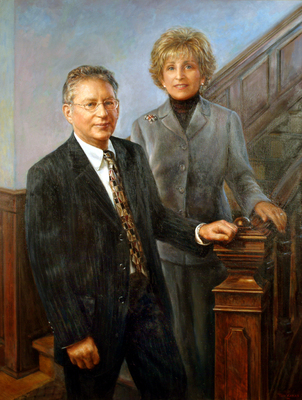 Text from Plaque outside Zedeck Auditorium -

Murray Zedeck, DO '62, was born in Brooklyn, New York, and received his bachelor of science degree from Long Island University, Brooklyn College of Pharmacy, in 1958. He credits his cousin, Morton Terry, DO '45 (1921-2004), with his decision to attend medical school. Dr. Zedeck graduated from Philadelphia College of Osteopathic Medicine in 1962 and proceeded with his wife, Lila, to southern Florida; there he practiced family medicine for 40 years.

Dr. Zedeck founded and chaired the boards of two Florida banks, and together with his brother, Leonard, an attorney, developed residential and commercial real estate in south Florida. Dr. Zedeck was professor and chairman o f the Department of Community Medicine at Southeastern College of Osteopathic Medicine, which became Nova Southeastern University, College of Osteopathic Medicine. Today, he serves on the boards of many professional, civic and cultural organizations, including the Board of Directorsof the Alumni association of PCOM (since 2000). He married Lila Kessler in 1960; the couple have three children and seven grandchildren.

In 2001, Dr. Zedeck gave PHiladelphia College of Osteopathic Medicine the largest single individual outright gift it had ever received. In recognition of his enormous generosity and in gratitude for his loyal support, the College named this amphitheater in honor of the Zedeck family. The amphitheater was dedicated in May 2004, when this portrait of Lila and Murray Zedeck wasunveiled. The family stated that

"This Amphitheater is named in honor of Benjamin and Sarah Zedeck, who devoted their lives to thier children's education and in honor of their children who are grateful for their education."