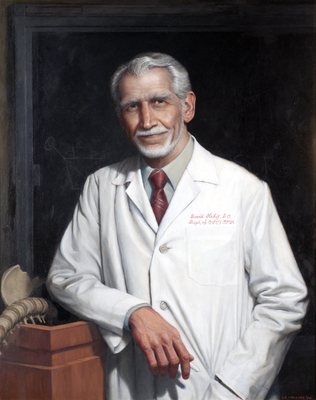 After graduating from PCO in 1944, David Heilig, DO, joined the faculty as assistant in the Department of Anatomy. He began teaching in the Department of Osteopathic Principles and Practice (OPP) in 1946, then chaired it from 1952 to 1955, at which time he pursued private practice. In 1971 Heilig returned to OPP, where he continued to pass on the skills unique to the osteopathic profession. He did this with a fundamental belief in the "whole person" in his approach to wellness. Heilig, who possessed a gentle demeanor, was known for an effective style of teaching that emphasized question and example. He not only taught OMT at the College, but also was its advocate through the years in which the emphasis on specialization drew students away from more traditional osteopathic practice. From 1979 to 1990, he chaired the committee on implementation of osteopathic principles and methods, which worked to rekindle the light of OMT among PCOM students and practitioners. Heilig balanced his life as academician and practitioner with community service. For 17 summers he helped take care of 600 children at Paradise Farms Camp, a non-profit organization for underprivileged children. He also served as medical inspector and examining physician for the schools of Upper Darby, and as president of his township's Rotary Club. Honored repeatedly for his scholarship, medical excellence and contibutions to osteopathic education, Heilig won professional recognition and collegial respect. He was president and fellow of the American Academy of Osteopathy, which distinguished him with the A.T. Still Medallion of Honor and the T.L. Northup Memorial Lecture. As chairman of the Academy's Board on Fellowship, Heilig was responsible for establishing a certifying board in Osteopathic Manipulative Medicine (OMM). PCOM awarded him the Christian R. and Mary F. Linback Award for Distinguished Teaching in 1977 and the O.J. Snyder Memorial Medal in 1986. Heilig retired from active practice in 1990 as professor emeritus, and spent most afternoons assisting in the OMM lab until his death at age 84.