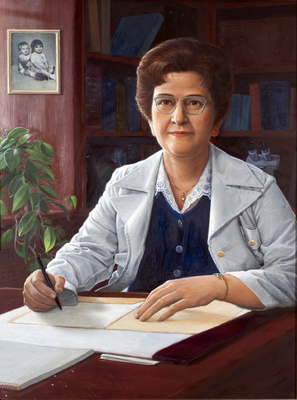 Ruth Waddel Cathie, DO, graduated from PCO in 1938 as Ruth V. Emanuel. Then, on a part-time basis, she earned her MD degree from Kansas City University, which opened doors to postgraduate courses closed to Dos. She gained practical experience working with a pathologist for the City of New York and pursued special training in cytopathology under George Papanicolaou, MD, PhD, the man who invented Pap smears. For several years, she and first husband, classmate Harold Cameron Waddel, DO, practiced at Osteopathic General Hospital in Dumont, NJ. (Widowed in 1963, she married Angus Gordon Cathie, DO, in 1969.) In 1954 Ruth Waddel Cathie joined the PCO faculty, devoting 21 years of her life to teaching and practicing pathology at the College. For seven years she served as professor and chairman of the Department and director of laboratories at PCOM and its hospitals. She was the first woman to hold the chairmanship of a basic science department at PCOM, and at that time, the only women -- other than those at Women's Medical College -- who held such a position in the entire City of Philadelphia. Ruth Waddel Cathie resigned from PCOM in January 1971, leaving to establish the pathology laboratory at Riverside Hospital in Wilmington, Delaware. She retired from Riverside in 1980. PCOM and the osteopathic communtity have distinguished her on several occasions. She received the Christian R. and Mary F. Lindback Foundation Award for Distinguished Teaching and the Alumni Association's Certificate of Honor. In 1980, the year in which she delivered the Otterbein Dressler Memorial Lecture, the American Osteopathic College of Pathologists (AOCP) named her Pathologist of the Year. A past president of AOCP, Ruth Waddel Cathie was the first DO allowed to attend the annual lectures of the Armed Forces Institute of Pathology.