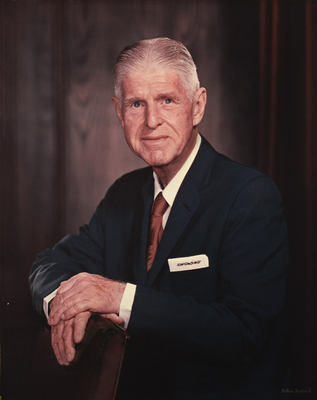 J. Ernest Leuzinger, DO, graduated from PCO's Spring Garden Street campus in 1924 along with his future wife, Margaret Mary O'Malley, DO. As a student, his career interests likely were influenced by William Otis Galbreath, DO, professor of diseases of the ear, nose, throat and eye. After graduating from PCO, Leuzinger started a private practice, which he maintained for 26 years, and began 56 years of service on the PCO faculty, initially as instructor in gastroenterology in the Department of Osteopathic Medicine. Having a strong desire to specialize in ENT, eye and bronchoscopy, Leuzinger also began many years of post-doctoral studies at Graduate Wills Eye and Temple University Hospitals. In so doing, he studied for some time under Chevalier Jackson, MD, a pioneer in the field of bronchoscopy. Leuzinger began to teach rhinology and otology at PCO in 1927 and in 1939 became chairman of a department that included bronchoesophagology. In that same year, Leuzinger was made a fellow of the Osteopathic College of Ophthalmology and Otorhinolaryngology. After his retirement in 1970, Leuzinger continued to lecture at the College and helped to organize the archives as well as research and edit the College's 75th anniversary history book. The College awarded him the O.J. Snyder Memorial Medal in 1962 and the Christian R. and Mary F. Lindback Foundation Award for Distinguished Teaching in 1966 and 1968.