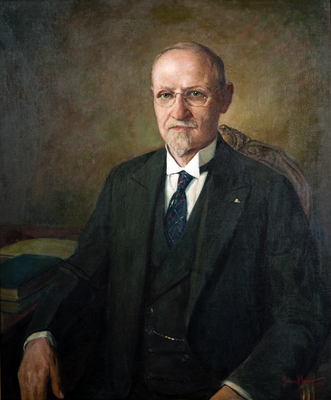 Born in Scotland, C.D.B. Balbirnie, PhD, DO, was educated in England where he studied pharmacy, chemistry and bacteriology. When he came to this country, he established a chain of four drug stores in Philadelphia and was elected to City Council at the age of 21, serving six years. He graduated from PCIO in 1911, beginning a long career on the College faculty, teaching bacteriology, acute infections and comparative therapeutics. As president of the Philadelphia County Osteopathic Society, he organized a meeting in July 1915 to advocate the construction of a hospital and college building owned by the College. The more than $12,000 pledged or paid that night by members of the profession generated the first funds for the 19th and Spring Garden Streets facility. For many years, Balbirnie served on the board of directors of the College and Hospital. He also held positions as director of the Osteopathic Clinics and chief physician of the Hospital. When it was time for PCO to begin yet another site selection process and building campaign in the late 1920s, Balbirnie headed the building committee of the board. It was his relationship with S. Canning Childs that led to the latter's generous lead gift toward the 48th Street campus.