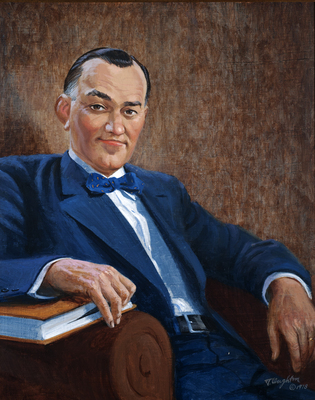 Otterbein Dressler, DO, was one of the first osteopathic physicians in the eastern United States to specialize in pathology. Upon graduation from the College in 1928, he trained with PCO Professor of Clinical Pathology Walter F. Clayton, PhD, MD, and in 1932 became professor of pathology. He held this post for 18 years, during which time he succeeded Dean Edgar O. Holden, DO, as acting dean (1944-1945), then dean (1945-1950). Among Dressler's contributions to osteopathic pathology was the establishment of the first training program in pathology in the osteopathic profession. This was a fellowship program, which eventually led to the residency program. Dressler had a prominent role not only in the College, but also in the Osteopathic Hospital where he was director of laboratories from 1934 to 1950. Dressler's talents were respected beyond the osteopathic community. During World War II, when DOs could not serve in the Medical Corps, he acted as adviser to General Hershey in the Selective Service Agency. Throughout the 1940s Dressler served on the Pennsylvania Anatomical Board and as deputy coroner for the City and County of Philadelphia. With him in this position, PCO students sometimes tagged along for additional exposure to autopsies. Dressler resigned from PCO in 1950, then continued his career in the Midwest. He was professor of pathology at the Chicago College of Osteopathy for 10 years and pathologist for Detroit Osteopathic Hospital, as well as consulting pathologist to more than 35 osteopathic hospitals in the country. Dressler was a founder of Michigan College of Osteopathic Medicine, which in 1968 became the first new osteopathic school of medicine in several decades. Dressler, who was a founding member of the American Osteopathic College of Pathology, received the 1963 Distinguished Service Certificate from the AOA, the highest award of the osteopathic profession. In 1965 he published a book on the art of living, entitled Parking on the Other Fellow's Nickel.