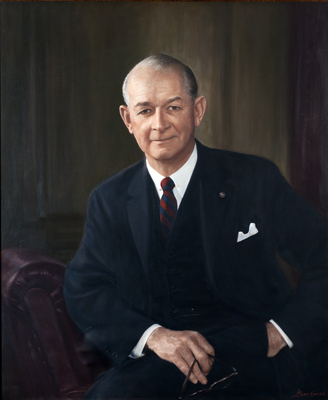 Paul T. Lloyd, DO, a name synonymous with radiology in the osteopathic profession, graduated from PCO in 1932, then became part of the College's first class of resident interns. This was the first of many milestones associated with Lloyd. After beginning his professional career as an instructor in obstetrics and preventive medicine in 1924, he went to New York City to pursue post-graduate studies in radiology. Lloyd was soon called back to his alma mater to fill a vacancy in the Hospital's radiology service, a position which led to his long and fruitful association with PCO's Department of Radiology. Although Lloyd did not hold the title of professor of radiology until 1932, he organized and assumed leadership of the Department in 1926. In two years time, he established the first radiology residency program in the osteopathic profession. Known as the "Father of Radiology" among DOs, Lloyd pioneered breast cance prevention programs, initiating routine X-rays for breast cancer screenings at the OHP at 48th and Spruce Streets in 1930. Lloyd's "Well Breast Clinic" included a post-treatment follow-up program. He directed cancer education and oncology programs at the College and served on the board of directors. In 1962 Lloyd was appointed emeritus professor of radiology, though he continued to teach at PCO until his retirement in 1976. For many years, Lloyd served as the Alumni Association's historian and director of PCO's Office of Alumni and Professional Affairs, which he established. Lloyd was also a founding member, past president, fellow and life member of the American Osteopathic College of Radiology. In 1964 PCO awarded him the O.J. Snyder Memorial Medal.