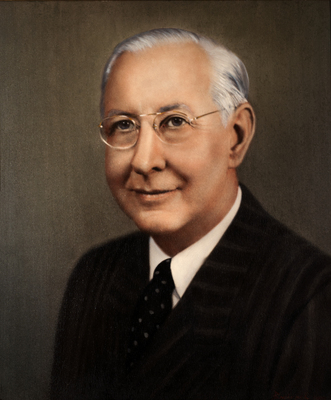 Soon after garduating from PCIO in 1917, H. Walter Evans, DO, served his country in World War I, then returned to his alma mater where he joined the faculty as associate in Obstetrics and Bacteriology. He organized and chaired the Department of Preventive Medicine in 1925, and in 1932 was made professor of obstetrics. Evans was known not only as a teacher, but also as a leader, although he never held the position of dean or president. His dedication was evidenced by his work on the development of the 48th Street campus, his efforts to help PCO survive the Depression and his assistance in guiding the College's program during the post-war years. But Evans' greatest contribution very well may be the pivotal role he played in the planning and construction of the City Avenue campus, where the principal classroom building bears his name. In 1963 the College honored him with the O.J. Snyder Memorial Medal. For many years Evans served as an officer of the Alumni Association, and during the latter part of his career, he was professional director of the hospitals of PCOM. He was a founding member of the College of Osteopathic Obstetricians and Gynecologists and was very active in the AOA.