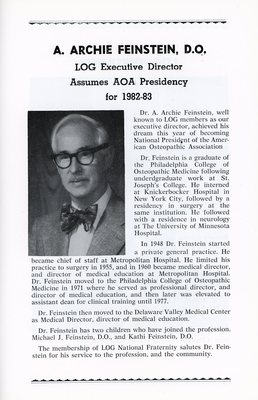 Dr. A. Archie Feinstein, well known to LOG members as our executive director, achieved his dream this year of becoming National Pres id~nt of the American Osteopathic Association Dr. Feinstein is a graduate of the Philadelphia College of Osteopathic Medicine following underdgraduate work at St. Joseph's College. He interned at Knickerbocker Hospital in New York City, followed by a residency in surgery at the same institution. He followed with a residence in neurology at The University of Minnesota Hospital. In 1948 Dr. Feinstein started a private general practice. He became chief of staff at Metropolitan Hospital. He limited his practice to surgery in 1955, and in 1960 became medical· director, and director of medical education at Metropolitan Hospital. Dr. Feinstein moved to the Philadelphia College of Osteopathic Medicine in 1971 where he served as professional director, and director of medical education, and then later was elevated to assistant dean for clinical training until 1977. Dr. Feinstein then moved to the Delaware Valley Medical Center as Medical Director, director of medical education. Dr. Feinstein has two children who have joined the profession. Michael J. Feinstein, D.O., and Kathi Feinstein, D.O. The membership of LOG National Fraternity salutes Dr. Feinstein for his service to the profession, and the community.